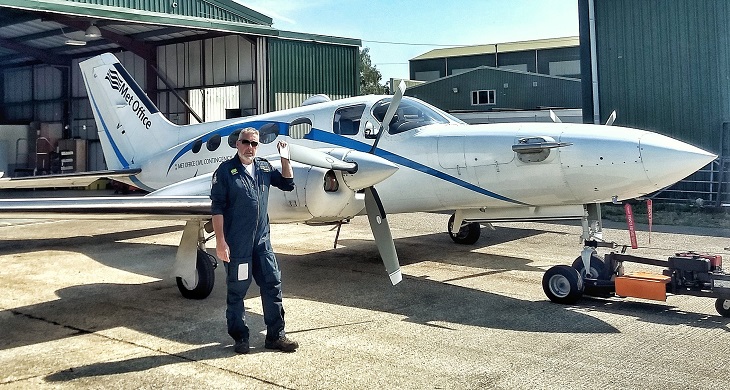 Alice Pengelly from the Clean Air Champions team met with Joss Kent to find out how he’s been measuring air pollution in the skies above our cities.

The Met Office Atmospheric Survey Aircraft’s (MOASA)original mission was to detect and measure volcanic ash, after the Icelandic volcano Eyjafjallajökull erupted in 2010 and caused huge disruption to air travel.

In 2018 it was adapted for the Clean Air Programme, with extra equipment added so that it could measure a wide range of pollutants.

Joss Kent from the Met Office, together with his team, has collected air pollution data over the Natural Environment Research Council (NERC) ‘supersites’ in London, Manchester and Birmingham.

They did this in two intensive data collection periods, one in summer andone in winter, flying upwind and downwind of the cities and circling over them at various altitudes.

Measuring pollution in the air above a city reduces the influence of local sources, such as exhaust fumes near a busy road. This gives a new perspective that allows air quality to be assessed in more general terms.

Joss explains that they put a lot of effort into adapting MOASA to measure air pollution, ensuring the equipment still works at all operating altitudes.

The air inlets are carefully positioned to avoid measuring the plane’s own engine exhaust, and collect air outside the aircraft’s ‘boundary layer’ which surrounds the fuselage.

Usual operational crew on MOASA sorties is two – the pilot and a Met Office scientist to manage all the science kit. They have to fly at just the right speed to ensure the air is sampled by the analysers correctly.

Air is sucked into the plane via an isokinetic inlet mounted on the aircraft nose. It is dried to remove water vapour, so that particles of pollution analysed can be directly compared to ground-based observations at supersites.

Sample air then passes into a nephelometer and a portable optical particle spectrometer (POPS), which measure tiny PM2.5 particles, as well as a tri-wavelength absorption photometer (TAP), which measures the amount of absorbing aerosol, including black carbon, present in the air.

“It’s quite a complex thing to do. There’s all the science kit, controlled by multiple computer systems and networks, and only one scientist to operate it,” says Joss. “If you were to stick an extra person on the aircraft, you would reduce its endurance by a whole hour, so we’re at the top end of the aircraft’s capabilities.”

Continuing to fly throughout the COVID-19 pandemic meant Joss’ team could access airspace usually too busy to operate in, such as central London. It also allowed them to measure pollution levels during the second and third lockdowns. They therefore have data others could not collect.

“In that sense COVID restrictions have been quite useful, because we’ve got into areas we never thought we’d do, and making measurements that hardly anyone else is doing.”

Aircraft Clean Air data is processed by Exeter based scientists, who archive and share it with other departments and researchers within the Met Office, whilst also making it publicly available for other researchers to analyse.

“We’re just using our expertise to produce as good data as we can,” Joss explains,”and quality assure it so that researchers can use it confidently.”